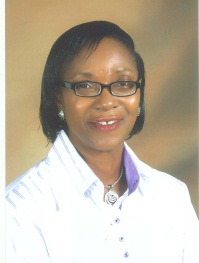 She is an alumnus of St. Augustine’s Catholic Primary School Ijebu-Ode, Our Lady of Apostles Secondary School, Ijebu-Ode, (1958 -1963); and Ijebu-Ode Grammar School, (1964). She commenced her working career at Ikeja Area Planning Authority, Western Region, Nigeria in April 1965, when she was employed as a student-in-training and won a sponsorship award for her training programme at The Technical College (now The Polytechnic), Ibadan, graduating in December 1967. She obtained the Diploma in Town Planning in December 1967, at The Technical College Ibadan, where she was an outstanding student.

She became a foundation staff of Lagos State Civil Service at Lagos State Development and Property Corporation, and completed her post graduate Diploma in Town and Regional Planning with Honours at The University of Melbourne, Australia in December 1972, becoming the first female Nigerian Professional Town Planner. She was inducted to the Nigerian Women Hall of Fame at Abuja in Nov. 2007 as the first female African Town Planner.

Tpl. Mrs. C. Kehinde George is the first female Fellow of the Nigerian Institute of Town Planners (NITP)1987 and the first female African Fellow of the Royal Town Planning Institute of Britain (RTPI) 1990. The pioneer and first female Chairman of Lagos Mainland Local Planning Authority (1998 – 1999), and first female Chairman of Lagos State Chapter of NITP (1998 – 2000). An elected Member of the National Executive Council of NITP, 1987 – 1988, and 1990 – 1992; Vice – Chairperson Yaba College of Technology Chapter of Women in Technical Education (WITED) 1996 – 2000; Pioneer Chairman of Lagos State Urban Forum for Slum Upgrading (Lagos Metropolitan Development Project), 2001-2002: Member NITP/Town Planners Registration Council (TOPREC) Examination Board (1998– 2000). She teaches as a resource person on the Masters Programme in Urban and Regional Planning at Lagos State University, 2011 to 2014. She is a member of the Building Collapse Prevention Guild June, 2012 to date.

She was a recipient of several honours and awards, some of which are: –

As Director, Libro-Gem Ltd, she is responsible for continuous research, writing, editing and publishing of articles and publications. A prolific writer, she has made numerous presentations at local, national and international professional fora. She authored The Challenges of Urbanisation in Nigerian Urban Centres: THE LAGOS MEGA-CITY SITUATION–A Town Planner’s Perspective, 2009; Wedding Message, 2010. Basic Principles and Methods of Urban and Regional Planning, 4th Edition 2015, Urbanisation and the Lagos Mega City 2016.

The book is educative and informative and will be of great use for foreign nations, foreign universities, government agencies, to consultants in the transportation and construction industry, and as reference to administrators; because of the synergy between land use and transportation, land value and development and economic stability.

The book has been edited by Nigerian academia and professionals and is recommended text for Environmental Science Students in tertiary institutions. This book discusses on more principles of Urban and Regional Planning, with examples from the country’s situation; some projects I have worked on; and also on some urban environmental problems such as urban sprawl, traffic congestion and increased demand for public transportation in Lagos Mega-City.

“URBANISATION AND THE LAGOS MEGA-CITY”

The second new publication; “Urbanisation and the Lagos Mega-City” captures the phenomenal growth of Lagos, the attendant environmental challenges and efforts made to address the issues. As Lagos Mega-City expanded, the land use dictated the necessity for transport routes to and from different locations. Transport and demand for movement is inextricably linked to land use and land use activities. The book also highlights the potentials of investment and tourism in Lagos Mega-City. It will be an asset to foreign missions, investors, private and public libraries and for corporate bodies, professionals and for government offices as references.

As a Lagos State resident, and having lived in Lagos from 1965-till date: the author has witnessed a greater part of the phenomenal growth of Lagos in her 45 years of Town Planning professional experience.

In writing the books, she observed best professional practice. Both books also feature some projects she worked on as a foundation staff in Lagos State civil service (at Ikeja Area Planning Authority/LSDPC 1965-1979) as a Lecturer in Urban and Regional Planning, at Lagos State Polytechnic (December 1985 – June 1986) at Yaba College of Technology (July 1986 – 2000) as lecturer and past Head of Dept; at Lagos State University (2011 – 2013) as a lecturer on the Masters’ Programme in Urban & Regional Planning; and as a Town Planning Consultant (1980 – 1985, 2000 – 2017).

The research and production of these publications were self-motivated and self-financed; and are her humble contribution to Lagos State, Nigerian National economic progress and global human capacity development.

The third new publication is – “REFLECTIONS: A 70th Birthday Anniversary Memoir, June 14, 2018”, originated from some of the papers the author has presented at Community Interaction, School Programmes, local and international conferences.

The chapter on raising children can be read on this website. It highlights her experiences and views on raising my children from infancy to adulthood and the challenges of social media and peer pressure in a rapidly digitized environment (with accompanying drug and substance abuse, alcoholism, illicit sex and indecent dressing). May the Lord continue to bless us all and keep our families safe and happy. The stable family is the base of a stable nation.

There is further discussion on life, living, family values and relationships with references to Bible passages.

A chapter in the book is an overview of the phenomenal urbanisation of Lagos Mega City, and the problems arising therefrom (physical, social and environmental).

The purpose of this book is for those coming behind to benefit from her life experiences.

She is a community leader in her residential neighbourhood. She is also a mentor to the youth at church and at the Nigerian Institute of Town Planners. She is a Life Member of Lagos Country Club, Ikeja and a Patron of the Table-Tennis Section.

She is married to Arc. Akin. George FNIA, of Thomas Ige George Family, Upper Offin Lane, Lagos Island. The marriage is blessed with children and grandchildren.